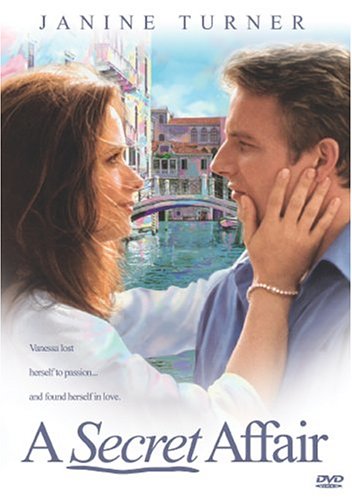 At last it can be revealed. Another classic Barbara Taylor Bradford novel has hit the screen. Barbara Taylor Bradford’s A Secret Affair stars Janine Turner (from Northern Exposure, Beauty and Fatal Error) as the beautiful Vanessa, who defies her family’s wish to work in their successful retail business and instead pursues her love of art; and Paudge Behan – son of legendary playwright Brendan Behan - as Bill, a charming Irish war correspondent with whom Vanessa meets and falls in love. The other prime location for A Secret Affair, which aired on October 27, 1999 on the CBS television network, is Ireland.

Vanessa Stewart is a beautiful American woman engaged to be married. Vanessa is an artist and is also a buyer for her father’s company. She goes to Venice on a business trip and meets television reporter Bill Fitzgerald from Ireland. They fall madly in love in the four days they are in Venice. Vanessa realizes, because of him that she would rather be an artist than a business person.

She comes back to the States, and he invites her to meet in Ireland. There she meets his mother and daughter. Vanessa comes back to the U.S. and breaks her engagement. Bill and Vanessa are supposed to meet again in Venice. Bill is on assignment in a war zone and is kidnapped by looters. There is a ransom to be paid, but nobody shows up to get the ransom money...