Back to Photo Gallery 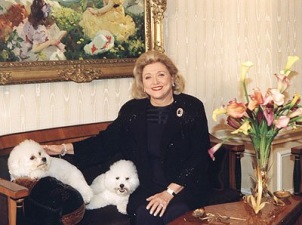 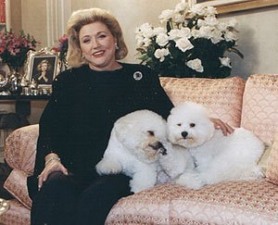 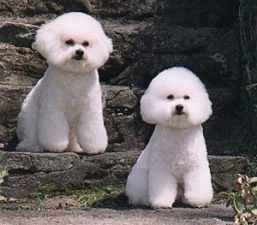 “Bob and I have always loved the Bichon Frise as a breed, and I am so enamored of them I wrote about them in my novel Voice of the Heart, which was published in 1983. I am reproducing a segment from the book which gives details about the dogs and their ancient history.”

“…Victor grinned at Diana and said, “I’ve never seen dogs like these. What’s the breed?”

Victor frowned, puzzlement on his face. “Afraid I’ve never heard of it.” He glanced down at the dog, scrutinizing her with great interest, noting the silky fur, the unusual tail resembling an ostrich feather, the long floppy ears, the black button of a nose, and the huge round eyes, sparkling like black diamonds. “She’s a beauty,” he said enthusiastically and placed the dog on his lap. He began to scratch her head, still smiling broadly.

Diana was pleased by Victor’s spontaneous and loving reaction to her pets and she told him, “They happen to be marvelous little dogs, Victor. Bright, intelligent, and gay, with endearing habits. And although they’re rather pretty to look at, they’re also quite feisty. Like you, I’d never heard of Bichon Frises until Francesca told me about them. They’re her favorite dogs. A friend of hers in Yorkshire breeds them, and Lutzi and Tuzi are from the same litter. I got them a couple of years ago when I was staying at Langley Castle. They were just ten weeks old and so adorable. I couldn’t resist them.”

“Oh, so they’re an English breed,” Victor said, continuing to fondle Tutzi, who had settled down with him contentedly, enjoying the attention.

“No, As a matter of fact, they’re not. The Bichon comes from the Mediterranean region, the Spanish mainland to be exact. At least, that’s where they apparently originated. And they’re an ancient breed, dating back to the time of Cleopatra.”

“No kidding,” Victor exclaimed. “Tell me more about them. I’m crazy about dogs.”

Diana laughed dismissively. “I’ve been known to wax eloquent about them for a full hour, so perhaps you’d better not get me going on the subject now.”

“Listen, I meant it. I’ve never seen such gorgeous dogs in my life. I’m very curious about them, so come on, fill me in,” Victor insisted.

“Well, all right, a potted history, but that’s all. It seems that Spanish sailors took the dogs abroad, around the fifteenth century, mainly to the Canary Islands, Tenerife in particular. That’s why they were known as the Bichon Tenerife for centuries and they became popular pets with the Italian nobility. In the sixteenth century, after the French invaded Italy, the returning soldiers brought the little Bichon back to France. The dogs were court favorites during the reigns of Francis the First and Henry the Third. Fragonard often depicted them in his portraits of the French aristocracy, and actually so did Goya, in his painting of the Infantas of Spain, who also favored the Bichons. During the reign of Napoleon the Third, in the middle of the eighteen hundreds, they also enjoyed great popularity, but they fell out of fashion in the early part of this century.” Diana paused, lit a cigarette, and continued. “For awhile the Bichon became a sort of a little nomad, cavorting through the streets, accompanying the organ grinder, and delighting everyone with his merry disposition and friendly personality. As a matter of fact, Bichons became extraordinarily talented trick dogs and performed complicated routines at fairs. They even went into the circus.” Diana laughed. “Believe it or not, Victor, they are very acrobatical given half a chance.”

“And How!” Francesca reiterated. “You should see the way Tutzi and Lutzi take flying leaps on and off my bed. And usually late at night, when I’m trying to sleep. Not only that, I can never get rid of them. They’d be happy to frisk around with me until dawn.”

“I can’t say I blame them,” Victor rejoined, winking at her, and his smile was so wickedly suggestive that Francesca flushed. She turned her head, cursing herself for having given him such a marvelous opportunity to tease her.

Diana, who had not missed this small exchange, hid her amusement at them both and went to join Francesca on the sofa. She said in a matter-of-fact tone, “How do you like your tea, Victor? With milk or lemon?”

“Lemon, please. So they became circus dogs, did they. Mmm. Very interesting.” He ruffled Tutzi’s crown of hair. “No wonder I had such and instantaneous affinity with them. Fellow entertainers, eh? Diana and Francesca smiled with him, but before either was able to comment, he went on, “And then what happened?”

Diana poured the tea and proceeded to explain, “Just after the First World War, they became very popular again as pets, but it wasn’t until the early thirties that serious breeding programs were started and the French Kennel Club admitted the Bichon to its stud book…”