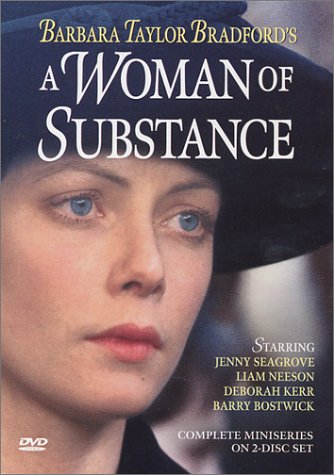 Based on the phenomenally successful novel, the sweeping saga of Emma Harte’s dazzling climb from impoverished shop girl to head of a vast empire is a celebration of one woman’s indomitable spirit. The six-hour miniseries A Woman of Substance aired originally in the United States in November 1984 and earned exceptional ratings. Deborah Kerr and Jenny Seagrove shared the title role of the indomitable Emma Harte, and superstar Liam Neeson created the role of Blackie O’Neill.

The miniseries earned two Emmy Nominations: one for its star Deborah Kerr and one for the series. Since the initial broadcast, it has aired five times on national television in the US. A Woman of Substance has also been broadcast worldwide with great success.

A Woman of Substance charts the life of Emma Harte, from kitchen maid at the beginning of the 20th Century, to respected business woman and Grandmother in the 1980’s. From humble beginnings Emma Harte starts her business with a small shop, but over the next twenty years she expands her stores and invests in the growing textile industry in Leeds. By the time of World War 2, Emma is the head of a major retail and manufacturing empire, but she has struggled all her life to find love.

After an illegitimate daughter and two marriages, she finally meets the love of her life, Paul McGill, but their affair is cut short by a tragic accident, leaving Emma with his daughter. In the 1980’s Emma faces one of her biggest tests – her children’s attempt to remove her as head of her company, but Emma is far from the senile old woman they think she is – she is determined to stop them at all costs.

Barbara Taylor Bradford: On A Woman Of Substance